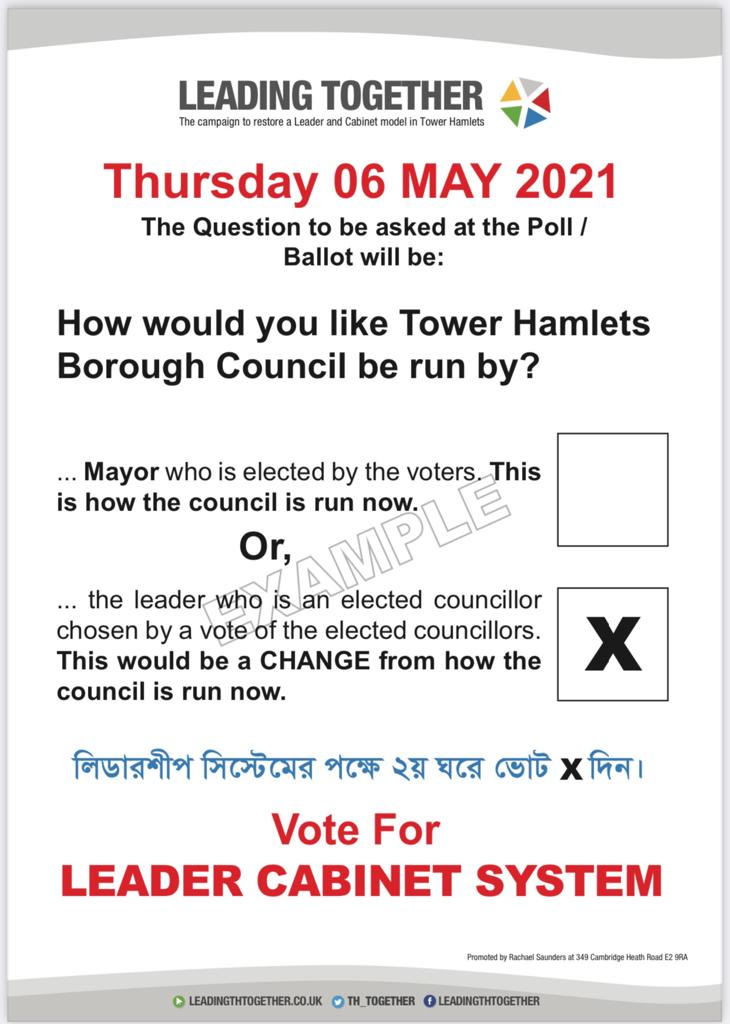 On Thursday 6th May there is a referendum on how Tower Hamlets Council is run.

We recommend that you choose the second option and vote for the Leader model.

There is a third option for local councils – the committee model – which we called for because we think it would be even better, but the council can only put one alternative system to a referendum. Cllr Rabina Khan supported Cllr Andrew Woods Committee System Motion but this was overturned by Labour’s preference for the Leader and Cabinet option.

In spite of this, we think that the Leader and Cabinet would still be better than the Mayor model. Referenda on an alternative to the mayoral system can only be held every 10 years. So, it is really important to seize this opportunity for change.

The Mayor model facilitated Lutfur Rahman’s rise to power in Tower Hamlets. Rahman was found guilty of corruption by an election court and was removed from office. He is campaigning to retain the mayoralty. After the scandals of the past years under the previous mayor, we believe Tower Hamlets needs a change for the better.

The ballot paper asks the question ‘How would you like Tower Hamlets Borough Council to be run?’.

Tower Hamlets Liberal Democrats have joined with other mainstream parties in Tower Hamlets including Labour, Conservatives and the Greens to support the abolition of the Mayoral System to be replaced with a more collective representative system.

(PS If the Borough decides to retain the Mayoral model, of course the Lib Dems will be campaigning for our candidate to win!)