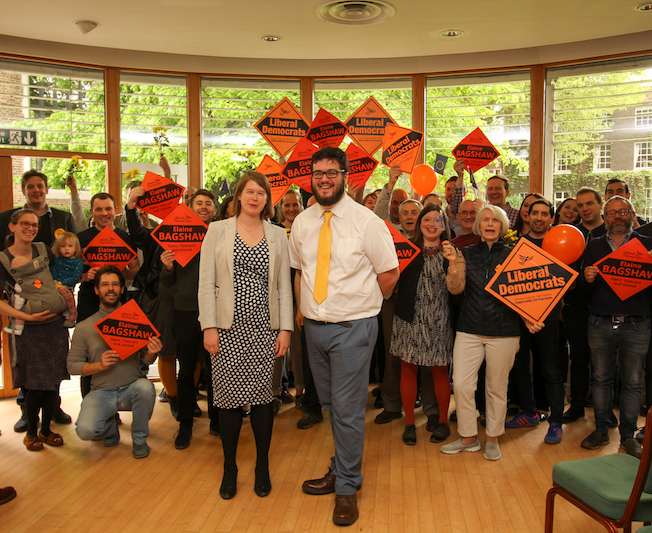 Liberal Democrats in Tower Hamlets officially kicked off their General Election campaigns today, with candidates Elaine Bagshaw and Will Dyer laying out their three main priorities if elected: fighting a Hard Brexit, protecting local NHS services and tackling the crisis in affordable housing.

The local party has tripled its membership since the EU referendum last year, recently surpassing 700 members. It also raised more than £3,000 in the week of the snap election call.

Poplar & Limehouse Liberal Democrat Candidate Elaine Bagshaw, an active local campaigner, told a packed Limehouse conference room that she and Dyer are the right candidates to fight a Hard Brexit.

“67 percent of Tower Hamlets voted to remain in the EU, but the local Labour MP ignored his constituents and instead helped Theresa May’s Tories push her Hard Brexit through Parliament,” Bagshaw said. “As a result, we still have to fight for Britain’s place in the Single Market--membership we need to make crucial investments in health and housing in Tower Hamlets.”

“In the 20 years that the current Labour MP has been in position, child poverty in the area has remained close to 50 percent. For 13 of those year’s we’ve also had a Labour government so it’s clear that Labour isn’t working for Tower Hamlets.”

“Hard Brexit will hit the poorest hardest. Tower Hamlets has a child poverty rate significantly higher than the national average of 30 percent. Hard Brexit is plainly something we cannot afford and did not vote for.”

“Lib Dems, here in Tower Hamlets and across the country, have a clear plan to fight Hard Brexit, invest in our NHS, and tackle the housing crisis. These will be our top priorities if voters in Tower Hamlets choose us as their Members of Parliament.”

“All elections are important, but especially this one: it is a chance to change the direction of our country and our borough and to stand up for a Britain that is open, tolerant and united."

The launch event concluded with campaign training for local volunteers and supporters, followed by an afternoon of delivery and speaking to local residents.