Your Lib Dem Candidates for Blackwall and Cubitt Town

Local residents Richard Flowers and Guy Benson and former councillor Azizur Rahman Khan have been selected to be the Lib Dem candidates in Blackwall & Cubitt Town for the May 2022 council elections. 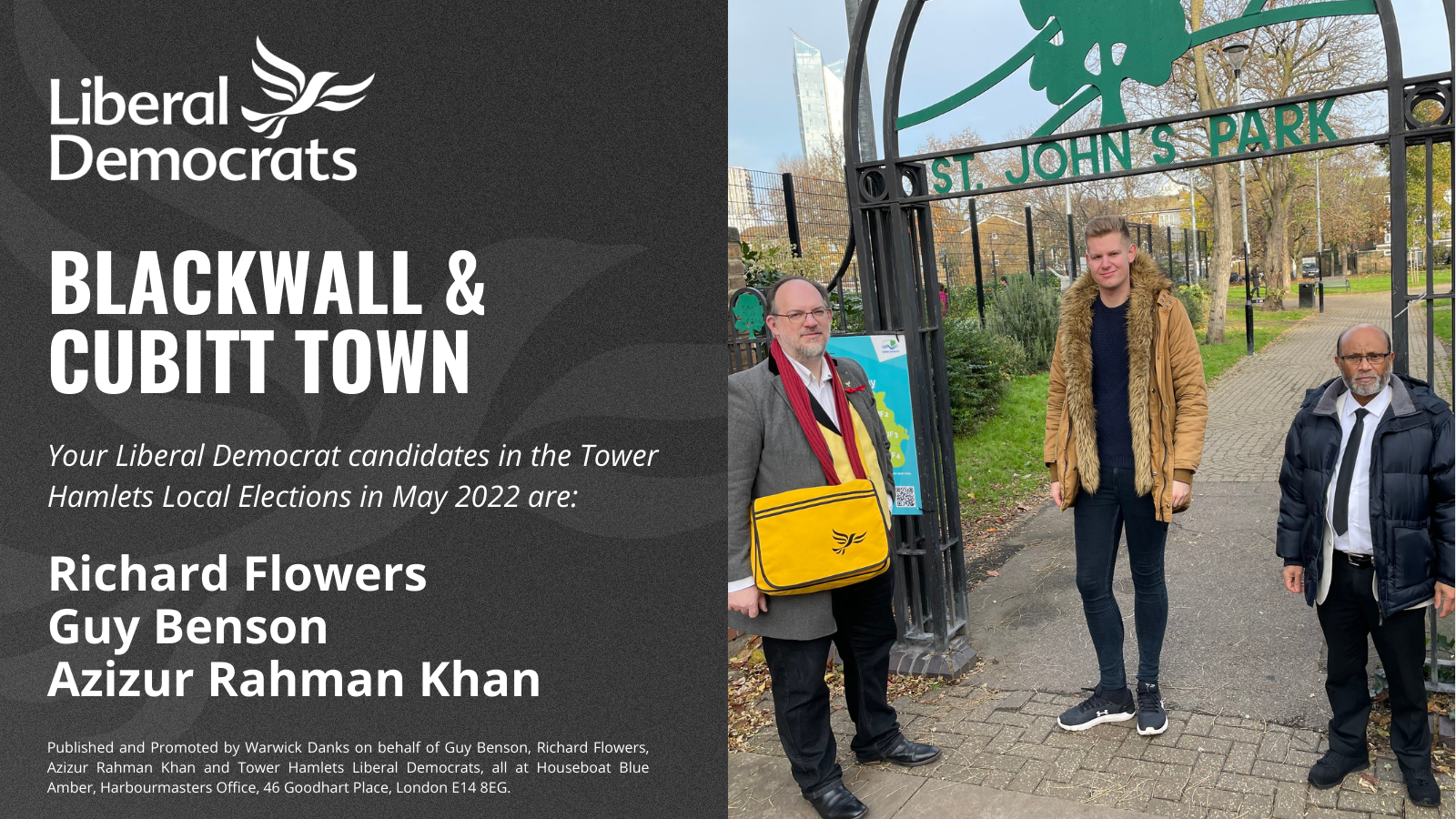 Richard Flowers has lived in the ward with his husband Alex for over 25 years. They were able to get married thanks to Lib Dems in government. He has campaigned alongside Councillor Rabina Khan and London Assembly members Caroline Pidgeon and Hina Bokhari for the law on leasehold to be changed, and for the government to step in and fix the cladding scandal. During the pandemic, he helped to deliver meals to local residents on the Isle of Dogs. He was also the Lib Dem City & East candidate for the Greater London Assembly in 2021.

"We need a council that listens to us and delivers for us, not one that's only interested in itself and its own infighting.

"I've walked along Cable Street, from the Tower of London to Canary Wharf, and along the river path from Island Gardens to the mouth of the River Lea; I've seen the best of people trapped in the worst of housing, let down by developers, let down by the government, let down by the council.

"I love living here, there is so much opportunity, and diversity. I want to unlock that opportunity, by listening to people and delivering cleaner street where we can walk and cycle, local jobs and support for small businesses and homes where people can afford to live."

Guy Benson is a resident of Crossharbour (within the ward) and is active in the local community. He works in the financial services sector in Canary Wharf and is a qualified Chartered Accountant, meaning he can scrutinise misspending by the local council and get a fair deal for residents. Originally brought up on the South Coast, he moved to London in 2019 and has made our Borough his home.

“Labour have dominated politics for too long in Tower Hamlets. This has meant that crucial services have been left underfunded and people are not getting a fair deal. I want to provide an opposition to this and effectively scrutinise the work of the council.

Locally, I want to be an active campaigner for our area. This would be a stark contrast to Labour’s missing-in-action council team. My priorities are ensuring that we are tackling the housing crisis head-on, making sure that young people are not priced out of our city and making our streets safe again.”

Azizur Rahman Khan has been a resident of Tower Hamlets since the 1970’s and was a Lib Dem councillor from 2002 - 2010. He currently works in the security sector and has many years of youth work experience. He enjoys volunteering with projects and charity organisations which aim to support children, young people and the elderly with education and recreational activities.

“I will campaign for improvement in areas such as housing, leisure activities, and improving antisocial behaviour. I enjoy serving the people of Tower Hamlets.

"The Blackwall & Cubitt Town Labour councillors have been missing in action since they were elected in 2018. It is time that somebody stood up for local residents, particularly those impacted by housing problems in the area.”